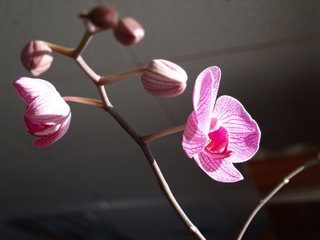 The orchid continues to produce beautiful blooms each day. 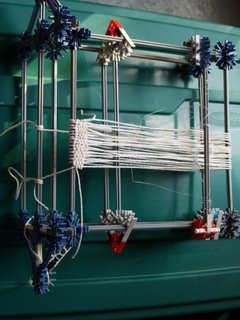 Mark and I were playing with his K'nex set
trying to put together something like a loom ;o) 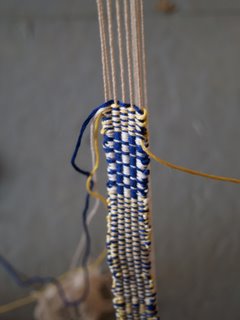 A small band being woven -- the five crosses are 'stars.'


There is an old tale I remember - a myth, about Rabbit. Rabbit saw the stars in the sky - and wanted them for his own - to keep the light closer at night. Rabbit was warned by the other creatures that the stars could not be touched. However, Rabbit did not heed the warnings of the other creatures. He wove a basket of wood, then went into the Sky Canopy to gather the stars in his new basket. Each time Rabbit would lay paw on a star, it would burn him badly, turning his paws black - but he would get the star into the basket and then lick his wounds. After several stars had been gathered, the basket itself caught fire - and Rabbit lost all of the stars and returned down to earth to cry over his four black paws and singed ears. (However, Rabbit did have the burning basket for a campfire - and thus, it had brought fire down to Earth, but this did nothing for his burnt paws!) 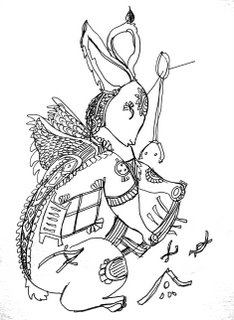 Rabbit Draws Out a Band of Cloth
January 26, 2007 8:30 pm
post-processed photograph of original drawing
(not related to the myth above)
Now: Nearly nine years later... I have a different interpretation of what this drawing meant.  Our daughter was conceived two weeks later.  This was  a little bit of foresight that my body was getting ready to make a child - readying the basket etc.
Posted by RheLynn at 7:01 AM

Are you sure the drawing isn't related??? I can see connections...

Good question! The drawing reminded me of the myth ;o) which is why I posted my version of it today. There is also a Hopi myth about Rabbit shooting the Sun, which is very similar, and other myths about Rabbit (or other creatures) bringing fire in one way or another.

Those do look related. Your artwork is amazing. I look forward to seeing more :)

Your drawing does look like it embodies the myth.