a bit of painting 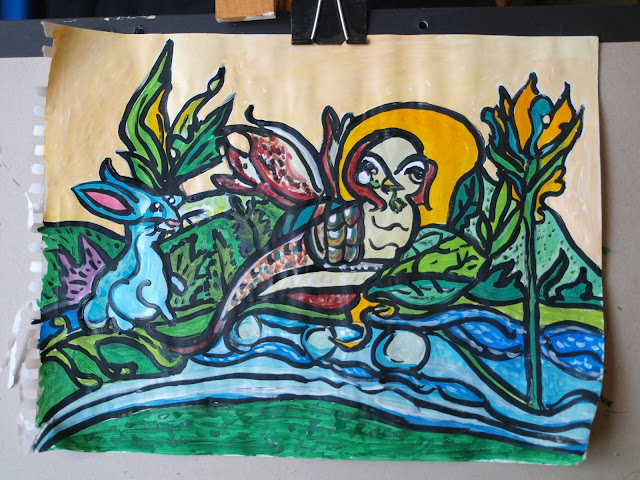 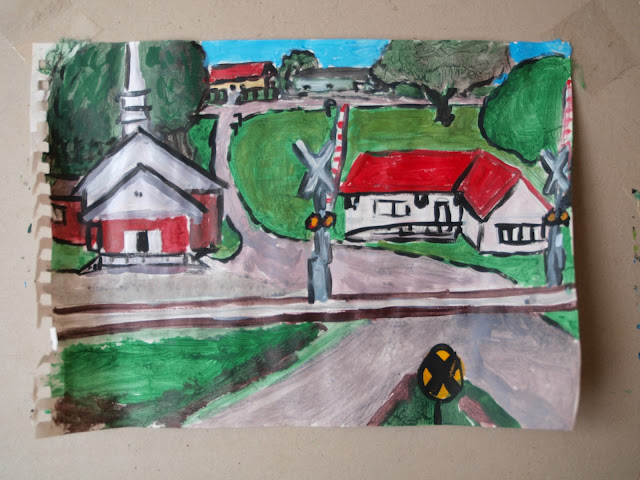 I joined a Zoom art group today for a 'craft together' session... I had already painted the 'first try' at one of the landscapes I like on my postal route (from memory, then with help from Google maps for details), and then during the session I made this little fantastical nature painting // the landscape is 8x10 and the other is 11x14

Esme and I went to the 'duck park' - mulberry park, and we only saw three ducks, and they were occupied with another family the entire time.  But, we did get to see turtles, lots of them (maybe a dozen) swimming lazily around the dock and very interested in us.  There were tiny ones and medium sized ones and a very large one.  We wondered if some of them were hatchlings - if this was a family.. or ?  We saw lots of fish, as well.  Esme can see through the water better than I can.  I can see the air currents much better, which I think is why seeing through the water takes so much concentration for me.  She said she can see the air currents too, as I described them, but it makes her eyes hurt compared to looking through the water.  I know what she means - it is like a 'different channel' of seeing, the air as soup, in 3D instead of 2D... and it can be very distracting to see it all of the time.. so I turn it off a lot, too -- trying to see it for a bit is fun, for longer than that, it feels like your eyeballs are going to twitch and come out of your head *ha*

I had a terrible migraine building even before we went to town - but it has been so long since we spent much time.  We walked around the lake, got some fast food, and got a grocery item Daddy wanted.

The migraine continued to build here at home, and I drank more coffee, took a bath... a sinus pill (with no painkillers in it, just decongestant), and an ice pack to the back of my neck.  It started to calm down some, and the last bit of sun was fading outside - so I went outside for a walk.

I have come again to take in the June
the green spires rising and
the early flowers fading while
the summer ones are just starting
to nod their heads in time.


The Spring has been so late
and the Summer that should be is starting
warm and cold and wet and humid
it is a mixed up bag of weather
but perhaps now, as June perches at the
end of the week, the Summer will come.

With it’s heat I dread, and yet I walk here
in the cool of the evening,
the storm having passed by us for the moment,
and the frogs and the creatures of the air
are singing in the distance,
calling to me, and yet
telling me to stay away,
the hunting is good
do not disturb

Wings against the blank white canvas of cloud a profile, a wide circle and display

A sentence punctuated by Feather and Wing and Claw
air and forest, wind and green growing things in profusion
all around me the love of Nature, Water and the Earth
the smell of it coming from the forest
the deep dark holes in between the ivies
the grapevines, wildflowers and weeds,
the Oak so massive it could be an Evergreen reaching to the sky,
its glossy green leaves telling its secrets
and the tiny trees, maples and mimosas, fighting at the edge to
earn their own rights to become giants

But no one would read this sentence as I do
the red and golden grass in the sunset
the trails of white cloud lit underneath
the rustle of the wind circling and cycloning
in the spaces in between the tall trunks
with so many staunch branches
and delicate twigs and myriad leaves
and the ripping force of claws
clinging somewhere there
ready to pounce on small tails and eyes,
waiting for the oncoming Night