Our business  has some push now that should take us through December.  Between the SBDC and our business plan we can now get some tools, materials and enough salary to keep us afloat.  It is a real good start.  I have several projects lined up that will form a good portfolio.

I also got 'builder's professional' status on several different websites, so now I can get specialized supplies that we will need.  I am so much more optimistic than I was before I went to the small business administration a few weeks ago.  They helped set us on a good path.

I am still looking at a part time job, too - and doing this other work around it.  It will be 'punch' time for us, but I think we have been so relaxed for so many years with my job at Lowe's we were needing to do more.  And I need to pick up some skills and procedures.

I invoiced out one job that we will order things for in a week or so - but there are two small ones I'm able to do sooner.  I am planning on purchasing a full PEX tools kit and practicing with it - maybe on Miss Irene's house or on a project here, and getting experience doing that and doing it well.  It will be three years experience 'in the field' before I can sit for the plumbing license exam... according to the material I was reading.  I might be able to find a plumber I've worked with in the past who could vouch for my knowledge and also present a portfolio of work done to support it.  That is a future thought.

I have come a long way from the little girl that was 'half left handed' that her mother took tools out of her hands so she wouldn't hurt herself instead of teaching her to use them.  She stood by my elbow well into my teens if I had a knife and was ready to 'take over honey' and it was Mark that finally taught me how to cut meat away from bones and other things in simple cooking that she would never let me do.  And she freaked when I went on ladders to see what they were doing on the roof and yelled and screamed at me that I would be injured.  My grandfather and my brother would at least give me chances at things, mostly if she wasn't looking.  My brother is left-handed and I learned a lot from him, but only in bits and pieces.  My dad is left handed, as are all of the men in his family.  I could have really benefited from having more left handed people around that didn't freak when I held things 'backwards' (or force me to hold them right-handed) and instead showed me the way.  One of the many repercussions of childhood that I've fought and made progress with on my own.

My dad has gotten worse, but he still seems happy and himself on the phone.  I sent him a pack of drawings and sent my MIL a book with a passage that came into my head when I was drawing.   This business might be a blessing in disguise that we can talk more and I can do more things for them and maybe even get another visit in sometimes in the next year... although I'm not planning hard on that last one because I know it does take money and time and it was a bit stressful for him but he enjoyed it retrospectively.  Just a lot of big thoughts and worry there.. but at least now I'm not exhausted and hurting and going to Lowes every morning and night and hitting crisis after crisis of work to compound.  It has felt really good to get up in the morning at about the same time every day, not to worry 'do I have to be there at 6 am or 10 or is this a closing night?' jerked up and down every day.

The other thing with this design is I can go anywhere - to any city, website, competitor and get things.  That is a freedom I did not have.  I wouldn't even set foot in a competitor while I worked at Lowe's.  Well, they lost that.  Now it's kind of opposite - I won't buy a material from them unless it is truly the only place to get what we need.  There is one minor thing in this design that the only place I can get the right color thing for anywhere near that price is them - anywhere else is 150 dollars more... so that is worth ordering it from a store and picking it up.

I am reading a Hemingway.  It is on my list of things I have always told myself to do but never got around to it.  some would call that a bucket list but no its really an 'unchained' list.  I am almost done with it.. it really isn't 'great'... but had to see what the hype was about.  I have 'dh laurence' on my list, too - find one of those and see what that is about.  I picked the Hemingway by just running my hand over the shelf at the local library and grabbing something.. and it was this.. I like that method the Universe says 'okay, throwing this at you'.  It works better with books than other things.  I have 'Little Fires Everywhere' in my bag for when I finish this one.  That was at the store one day when I was wandering waiting for Irene to shop and I wrote the name down - saw it for 25 cents at the library book store sale and snagged it.

There is a music festival in one town today and an arts festival in another.  We were going to hit at least one of them, then we need to start on a project.

Esme bought this lidded jar from Paschall Pottery at the Arts on the Square in Paris, Tennessee.
She has a small collection of local art from these different events, she saves her allowance for such things.  She has it on her desk under the pastel drawing I framed for her from the last Christmas show. 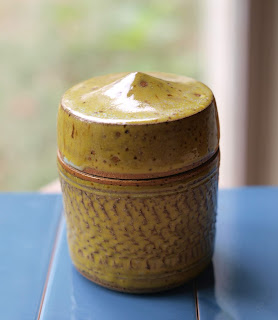 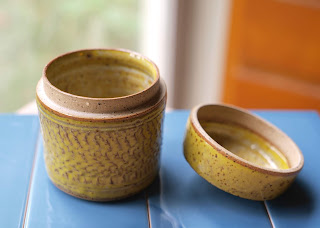 The artist told her how he had made it from a single thrown piece, and separated the lid with a popsicle stick.  He had also done a demonstration we watched where he made a pot on the wheel in front of several people showing the different techniques.  Esme had a great time looking at all the art but she came back to his stall - after looking at every other booth - to ask to buy something.
Posted by RheLynn at 6:03 AM