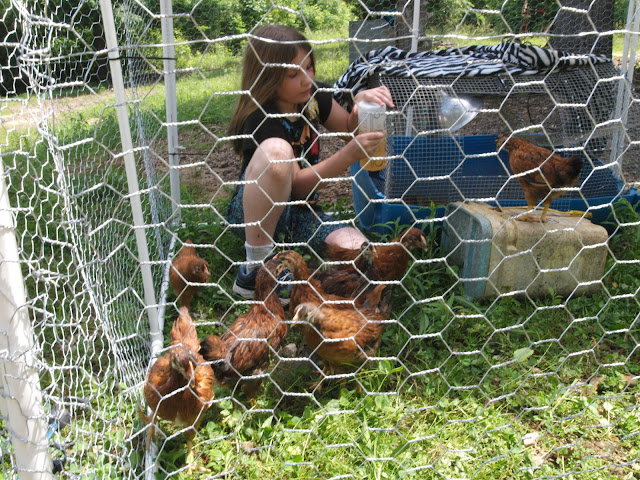 Well, one of these aren't a chicken.  Esme moved her chickens into the new playpen for the day.  They were a bit worried at first, especially when she walked away and left them alone for a bit... they weren't sure what to do.  Then they started eating grass and digging for bugs and exploring. 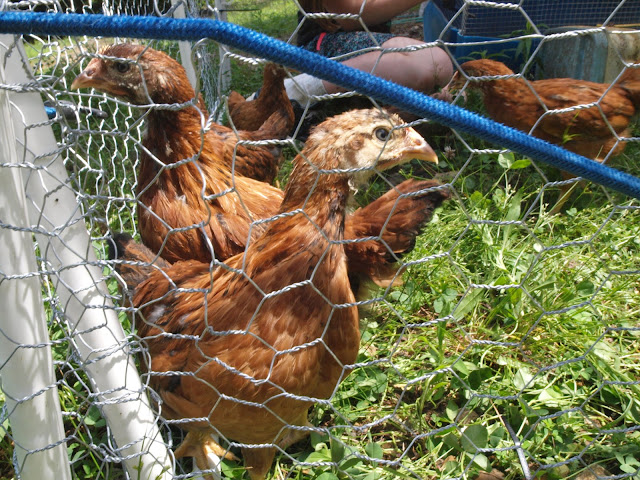 There is a sunshade on top, and they had their barrel cage and a bucket that provided more shade in one corner.  When I got home from work half of them were lounging in the shade by the barrel cage and the other half were scratching around in the grass.

I helped her clean out and change the bedding in the barrel cage before we caught each one (fairly easily, compared to Gennet chicken) and tucked them back into the fresh bedding.  They all worked themselves down into the wood shavings like it was a blanket.. and that was pretty funny.  We brought the barrel cage back inside to the hallway again and they will get more outside time today when I'm at work.

Also last night Esme asked me to make the onion she had gotten at the store.  My dad used to caramelize an onion for me (rarely, he didn't like to, but sometimes I would beg really hard) at the grill at the restaurant he worked at.  Esme had asked me if I could make soft sweet onions like the onions in an onion ring the other day, while holding a giant onion at the supermarket.  I told her I could ... and we bought it with the groceries.  So, even though I was really tired last night, I was making her fish sticks and that takes a while.. so I put the butter in the pan and slowly sauteed the onions to golden.  We cooked a couple of frozen pancakes and put the onions over them with the fish.
Posted by RheLynn at 5:56 AM