Back from town with Grandma, Esme is still up there, hopefully being helpful.
She was having such a hard time yesterday being good.  It was dark, cold.. she had Mom home all day but I wasn't catering to her activities 100% as I am still a bit tired out from being sick Christmas Eve.  She had about a half hour one person basketball game at one point.. and she has been very interested in exercise and getting big muscles lately, so she was telling me all about that and how lots of breath and muscles were good for her... *roll eyes* 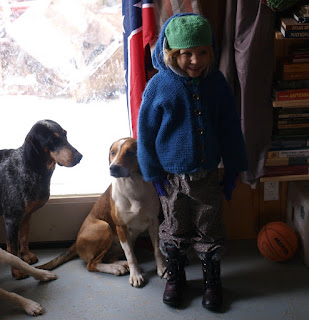 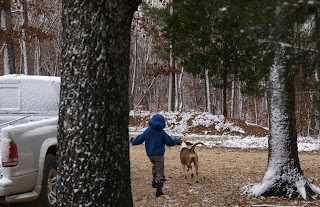 Yay, let's play!
I think it was about 15-20 minutes, and she was back inside claiming to have frozen to death.
I was impressed at that... I think I knitted an entire row on the afghan while she made snowballs ;)
I gave her a bath and knitted on it some more while she told me all about what toys could float and talked to a 'good spider' that was on the floor... telling it who she was and that she would not hurt it and asking it what it knew about her toys etc etc... very odd!  We also had more discussion about 'brain mad', 'pushing buttons',  and other things - Mark and I just want her to understand that she can't always have us do everything the way she wants, even if it does make her brain mad - she has to get over it and do other things, talk about other things, listen and make new ideas etc..  Her language skills are getting better, making it somewhat easier to talk about big concepts - but she still sometimes makes no sense at all, or way too much sense which is just as unsettling in one so small! 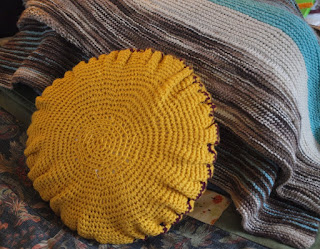 A round crocheted pillow I tried to recreate out of a book.. the ripples were not meant to be there but I did finish it, and it has already been in use as an elbow pillow while knitting, a book pillow for Mark, an 'extra' pillow for Esme when we are watching a movie.  I must say it seemed like a 'old granny square' type project at first, nothing that was going to get used, but it really turned out to be time well spent. 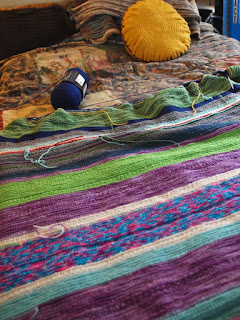 This was originally going to be Esme's blanket but it is turning out to be queen size, so we might steal it for our bed.  We watch a lot of movies here and the above pillow and other afghan (under it) have seen lots of use by everyone.  I have another patchwork quilt in the making as well, and am adding another row on the top of that today out of old outgrown Esme dresses.. recycling them in a true sense, pulling out zippers and cutting up the good parts of fabric for quilt squares.

Back to work tomorrow... and I received word my mom is still in the ICU yesterday.  I have a photo printed up for her now and have to send it.


I looked up several patterns for the round pillow, but did not like the idea of following any of them.  So, I just did it this way instead of following anything in particular.

Round pillow: Large crochet hook, chain three, crochet four in each chain, join with slip stitch, crochet around as for hat, increasing proportionately (that is the hard part - and I was too lazy to use row markers of any kind, thus the ripples) until object is of proper size.  Cut and stuff a pillow form to fit this size.  Center work over pillow and tack in place with small stitches.  Crochet around evenly for thickness of pillow form.  Begin to decrease evenly with work in place, following form - until half of the back of the pillow is covered with decreasing circular crochet.  Tie off and secure further with stitches if you would like, or leave loose for removal later.
Posted by RheLynn at 12:36 PM