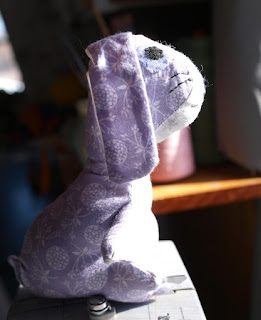 Purple rabbit,a prototype for the pattern I am working on. It is a mishmash of my Velveteen rabbit pattern from a few years back and the kangaroo pattern I've had up in my shop for a while.  I think I need to do something different in the bottom legs ... will be working on that for the next one or two I make. 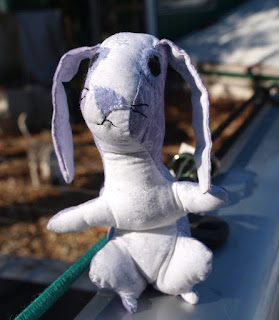 About 6.5 inches tall
Mark said to give it the 'Esme test.'  I showed it to her and she jumped up and down saying she wanted to hold that rabbit, can she have that rabbit.  After that, she insisted it sleep in her bed last night and it was an argument not to have him go to school today, as well. She said the long ears were just right, and that he is smiling.  So, it passed the Esme test.. but still needs that little bit of extra work to make it easier to sew and more stable to sit. 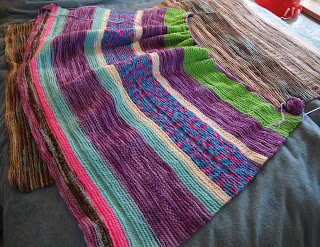 Esme's knit blanket is much wider than the one I had made previously - and I thought I was making them the same number of stitches wide. It might be that the other one shrunk in the wash? We'll see. I'm aiming to make it about the same length, so it is about halfway there.  Most of this is scarp yarn from other projects but a few of the skeins were bought for the project. I'm running out of scraps again - will have to find another random print color maybe to throw on after that green became so strong. 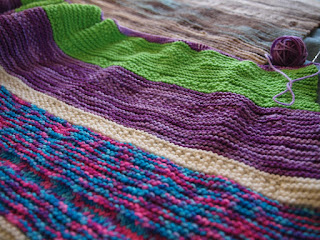 I noted to Mark that all of these pictures look very childish in this post... but they should, as they are projects for a child There is a division in my work between things that are very 'fun' and childish, and things that are straight cut and elegant. I never know which way something is going to turn out - it just goes the way it wants to.

I walked out in the garden today to check on what our fall/winter plowing might or might not have done.  There are little green sprouts in several of the areas, so the frost has not entirely (yet) killed off anything that is trying to grow.  There were Swiss Chard, broccoli, kale and rutabaga planted.  I will have to watch out for dryness... but the weather is looking right for that this week.
Posted by RheLynn at 8:41 AM