The garden on April 9th during the COVID-19 lockdown 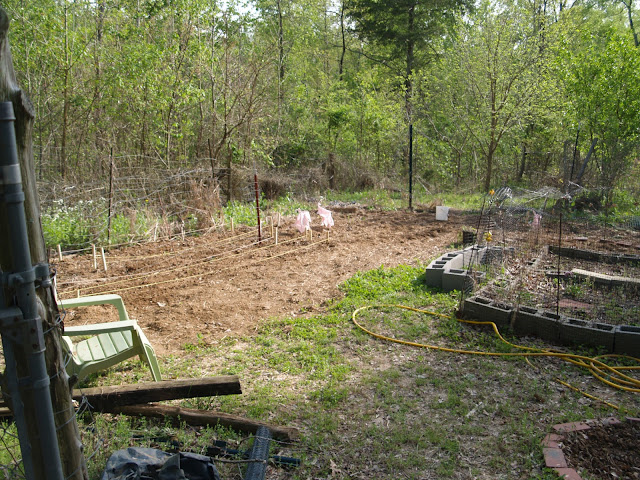 It is my garden philosophy that I don't have to pull every single weed.  I don't use mulch, and I tend to let the garden lead me where it may... which some years means harvesting the fruits of the greenhouse plants, and the first flush of seeds from the heirloom beans to save - then letting the rest go by the wayside...  Other years I'm out there every other day making soup from every little bit I can scrounge.  Every year is different. I'm thinking this will probably be one of the latter years, with everything going on.

This year I have changed up the infrastructure a little.  That circle of bricks to the right in the bottom picture was there maybe seven years ago?  But the raised bed was not there until three years ago.  The time felt right to put it back, and I even put up a bean fence and put the Mayflower beans next to it.

The pictures do not show the last bit of what I did before sundown.  I was out in the garden at sunrise this morning -- and in the afternoon -- and at sundown, but not a lot of the time in between.  I sat for a while and knitted in the sunshine before noon :)

Before sundown I planted seven hills in the front of the long section.  Each hill has about five Kenearly Yellow Eye beans (bush) and a Zephyr hybrid squash seed or two on the right hand edge.  This is flying by the seat of my pants here.  It was about 6 pm and I looked over at the seed box and said 'ok, this is what is going down right now.'  Up until that very moment I was saying 'yes I will put the Zephyr somewhere' and 'yes I will put some sort of bush bean there, but I don't know what or how, yet.' 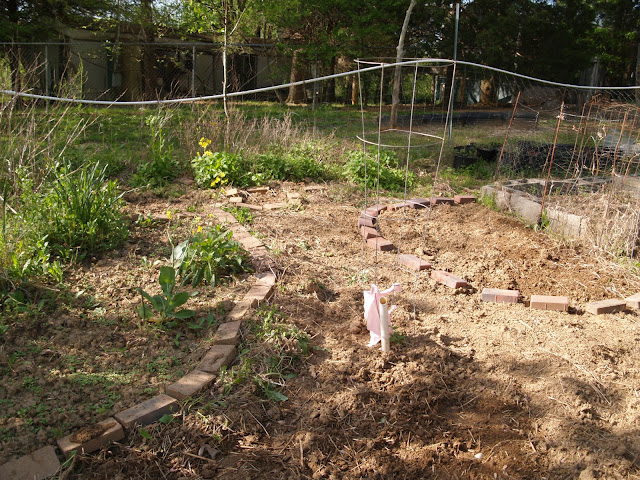 I took sixteen of the cement blocks and made Irene the start of a raised garden.

But, we are in the year of COVID-19, and the plan I had made to go back and get dirt at that garden center was upended by a new city ordinance pertaining to 'quarantine lockdown' someone posted about that is 'food, fuel and work only or be arrested'.. I'm sure that is a bit more than the actual law intends - they conveniently did not link to it - but I don't want to be subject to bad interpretations.. so now I'm avoiding that city like they must have wanted everyone to do.. right?  So that business I support doesn't get one of the few orders I might have done this year because of this? And it will probably all change again next week.  Last week they were still saying that garden plants were okay, but don't linger and don't browse.  This week, they've gone Machiavellian... but probably only according to people posting on Facebook who are a bit bored?  I'm not sure.  I'll remember this in a few years.

There is another store in the other town that not only has internet ordering (which the other one didn't - 'in store buy only'), but has curbside pickup without getting out of your car.  So I guess they get the money and we still get an extra vegetable bed for Grandma.

Who knows how 'essential' that is going to be this year, but in almost any year I would call it essential if someone wants to put the work into the soil for fresh food.

((climb down off the soapbox))

I guess I get a little worked up about gardens, and especially because without them, gardens that is, we are stuck buying everything out of a box that may or may not be there when we go to pick it up again.  We found that out a month ago - with all the empty shelves.  It's warm enough now (it wasn't then) so let's grow.
Posted by RheLynn at 5:34 PM