I did some editing on House of Sunlight, and have three stories that need to be gone over.  I have found some of the art - was wondering if I should try to paint or pastel paint some of the other imagery in my head.  There is quite a bit on the postal route, scenes at stops etc, that are interesting to me but I don't know if anyone else would find them as pretty as I do.  With my strange vision, stigmatism and color differences and synesthesia, I sometimes 'ooh' and 'ahh' over things others would find mundane, for myself that is a good thing, added wonder etc, but for drawings sometimes I would think what I think is spectacular others would see as 'just another hill with trees.;'

My right shoulder clicked out on Thursday, about midmorning.  It is in what I would call the 'wing muscle', and usually I can just flex that area and it pops in and out without much pain, constantly.. But it has had a 'hitch' in it, and with my rib cage on that side, they are uncomfortable.  Friday I drove postal route, and today I did as well.  It isn't keeping me from actually doing anything, it just hurts, more than usual.  Mark suggested I get some more epsom salts, and/or take a hot bath.  I was able to get it to click back into place for a little while doing some stretches but as soon as I relaxed playing a game and watching TV I feel it has slid back.

Hope to get some sleep tonight, although I know that won't help the shoulder.  I've grabbed an extra pillow to try to sleep in a position that won't make it worse.

Ordered some more of the Village Naturals lavendar epsom salts, as those seem to be the only thing that actually works well for me.  The arnica 'chronic pain and fatigue' formula they have has made me nauseous more often than not, and the Dr. Teal's medicinal bath is more like a bubble bath and not much 'medicine' at all.

We almost have carrots!  I planted the Oxheart carrots from Victory Seeds this year in the raised bed up front of the house and they are about an inch in diameter now.  I ate one, just to test.  I wonder if the Hamburg parsnips are doing anything.  Also, out in the roadsides in Trezevant today, I saw wild morning glory blooming, light blues and even a darker purple.

I had been working three part time jobs up to this weekend, and now the temporary one is done.  I will have a little more time now, to edit stories and take pictures.  The part time job paid quite a bit of the bills this month and I found some things Esme would like for her birthday and have them coming.  Lydia car was expensive needing brakes and now the Taco truck wants something, as well - fought with it all day on the postal route, every time I put it in park it was 'fight like hell' to get it back to drive, so I ran most of the route with it like that trying to avoid any situation where I would have to park.  I was able to make it to the end of the day (thanks to a few customers who came out when I blew the horn, and came to get their packages) and bring it to the mechanics to await his diagnosis.

I've been doing more work on my Rivertown Minecraft town, and been wondering about making a comic book style history of it 'Minecraft storymode style' and seeing if that could lead to anything creatively.  I did the PDF for the net string bag pattern a few weeks ago on Labor Day and I have not been able to upload it as a 99 cent Kindle, yet - the file was too big and our internet was too slow - maybe at the beginning of next month I can get it 'out there'. 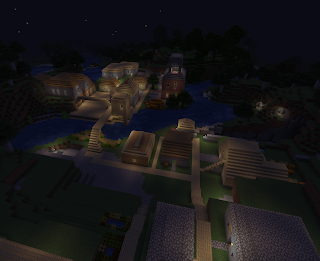