Continuing in the vein of January journals.
A few months ago I sat down and shared ghost stories with a friend, and somehow he dredged this one back up from my memory about a place we used to scare each other silly with in my youth.  I don't know if any of it is true, but this was the rumor and narrative we told around campfires and driving in the back of pickup trucks in moonlight back in the 1980s.


I am going to recount you a tale, a ghost story, from my youth.  It is not one I have found written anywhere else, and I will tell it to you exactly as I remember it.  It happened up in Northern Minnesota, on a farm out in Arbo Township.  There were two brothers, named Capeleddy, and they both lived in a two-story house down on the bend of the road just before the Civil War.  One of the brothers, the older one perhaps, went off to war, leaving his young wife alone at the house.  The younger brother was working in a logging camp, but then he came home to the family farm while the older brother was away.

It was said that the young wife and the younger brother fell in love and had an affair.  I could only wonder if they perhaps had wondered if the older brother was still alive after the war.  They were living in the house when the older brother came back from the war.  When he arrived back home he heard tales from other people of what had been going on out at the farm.  He arrived with a loaded gun, and without asking any questions, shot his younger brother out in the field behind the house.   He was supposed to have shot him through with a shotgun while the brother was defenseless.   Then he went up into the upper story of the house and shot his young wife, as well.  Then he shot himself.  The tale continues that if you go by the Capeleddy farm late at night, especially in the moonlight, you are supposed to be able to see spirits walking through the upper story of the house and in the field back behind it.

But, it was always told to me as a child not to look too hard, and never to let the spirit of the older brother see you, because he would chase after you Washington Irving style and try to pull you into their misery and you would never escape.  The building was completely abandoned in my childhood in the 1980s and falling apart.  Part of the tale could have been told simply to keep children from trying to go there and falling through the floors injuring themselves.  We talked a lot about the place but none of us ever set foot on it beyond the fenceline.

You could see through the upper stories at night that the moonlight really did shine oddly through the building.  I'm sure it was just a trick of  the light.  I don't know if the story is true and the few times I ever tried to look up the name I did not come across anything.  But, who knows?  It could have just been a tale my older siblings made up to scare the pants off of me.  But everyone did refer to it as the Capeleddy farm, and that there were gravestones somewhere on it.  I do know that nobody ever lived there during the decade plus we lived a few miles down the road.


And a sketch in my Brooklyn Art Project sketchbook 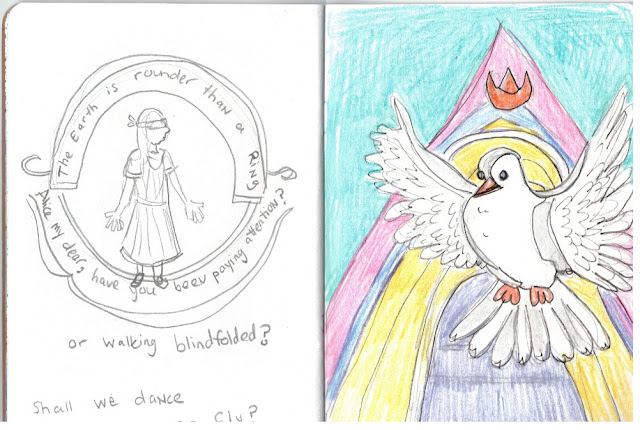 The Alice theme continues throughout the entire book
Posted by RheLynn at 4:33 PM