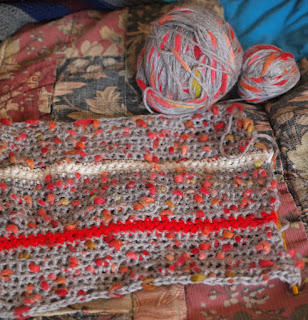 Esme and I have 'affectionately' termed this slub yarn 'Octopus Vomit'... it was a dollar a ball at the flea market last year and I found it during some organizing the other day.  It makes up for it by being warm.. but it's really kind of atrociously ugly.  I'm crocheting a lap blanket out of it along with stripes of some red and white I have lying about.


Language Mess
I've tried to take on the Japanese lessons again.. and I understand more the second time through than I did before.  However, while Welsh (Cymraeg) came easily to me (and Spanish seems hopeless.. which makes me want to try it again again again....) Japanese is there but in an entirely different 'place'.  Welsh rings like French right through my ears.. mostly straight through as words that I recognize.  Japanese has an extra 'bounce' quality where it feels like it accesses areas above my ears on the right side (I'm looking at Hiragana.. so that is probably it) as I'm listening and then making a 1-1 repeat imprint about the symbols to the sounds that is different than English or Welsh or French using the roman alphabet.  I remembered almost all of the Hiragana easily from the last time I went through these lessons... just some of the (consonant)-0 and (consanant)-a variations being hard to tell apart.  The biggest change is I am hearing the spaces between the spoken words better now than before - and can tell where there are modifiers and which word they are 'stuck' onto...modifiers like -wa and -ka being stuck to specific words instead of being words in their own right.   I'm continuing with the Welsh/Cymraeg in SSIW and Duolingo and getting very quick with it.  I like that I can listen to the Duolingo without looking at it and know exactly what words I'm going to see, that comes from SSIW and listening to Pigion podcasts and watching Teledu yn Cymraeg (television in Welsh).
Posted by RheLynn at 10:16 AM